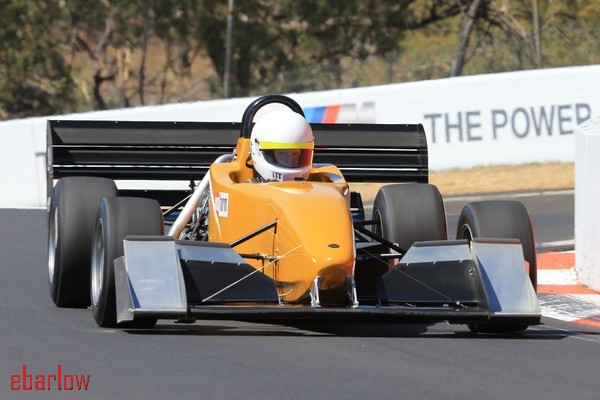 Saturday March 5 and a star studded field rolled to the line for the opening round of the 2016 NSW season at the Bathurst Esses course. The BLCC committee were smiling as warm weather and a sellout field lined up to do business for the first day of the annual double header meeting.

Current Australian and NSW champion Malcolm Oastler (OMS 28) went straight back to where he left off with an opening run of 23.54s. He was followed by Tim Edmondson (Gould GR55B) on 24.21s, just ahead of Mudgee’s Doug Barry (Lola T8750) and Queenslander Dean Tighe (Dallara) having his first run at Bathurst for some years.

The next couple of runs saw Oastler and Edmondson move into 22 second territory, pressed hard by Edmondson, Barry and Tighe. On the final run Malcolm shaved the necessary couple of tenths to leave FTD at 22.52s, just two tenths ahead of course record holder Edmondson. Doug Barry took out third outright with Dean Tighe next quickest.

In the smaller capacity open wheelers, north coasters Daryl Watt (Force PC) and Darren Read (Hayward 09) slugged it out with Read holding a slender lead for most of the day. Unfortunately for him come the final run, Watt grabbed fifth outright and the class silverware by just .08s.

Next quickest was Peter Robinson on debut in the ex Alan McConnell Van Dieman. Comisserations to Miles Hoare who had an off at the Esses on his first run and managed to tag the wall damaging the pretty Renault powered Tatuus. Our thoughts also for Bruce Albert (BMW) who later tagged the wall in a similar area and became a guest of Orange Base Hospital. Latest reports has him back home but still a little worse for wear. Best wishes to both drivers and we hope to see you back at it soon.

Up to 750cc F/L and Steven King was quickest in the Uberkart Reaper ahead of Denis Russell.
Class 2A Sports under 1600cc went to Zac LLievre (Westfield Megabusa) in 11th outright ahead of Andrew Walker (Turnham Bandit), while in the over 1600cc sporties Matthew Windsor (Envoy) headed Neil Depau (Skyline).

Gwynn Mulholland took a well earned break from stewarding to give his new Anglia a run while in the over 3Litre Sports Sedans Phil Heafey (Evo) maintained his edge ahead of Garry Ford (Escort) and Matt Halpin (Torana).

Grant Liddell (Datsun 1200) was unoposed in 3J up to 1600cc, while in 1601-2000cc Col Mayman (Beetle) kept ahead of the Datsuns of Steve Brydie, Warwick Berge and Russell West.
John Gilbert travelled down from sunny Queensland to take out 3J over 3000cc ahead of Martin McLoughlin (Torana).

As usual Matt Cameron had the Skoda cracking in RRNL up to 2.5L ahead of Paul Carroll’s Elise and the Toy86 of Mitchell Edwards.

Daniel Hollier (WRX) took out RRNL-AWD. Then we come to RRNL over 2.5L where a staggering 24 cars fronted. Dejan Buneta in the Sinister Black Supra was quickest (and 15th outright no less!). Liam O’Brien (HSV GTS) and Steve Morrison (Mazda RX7) took out the minor placings.