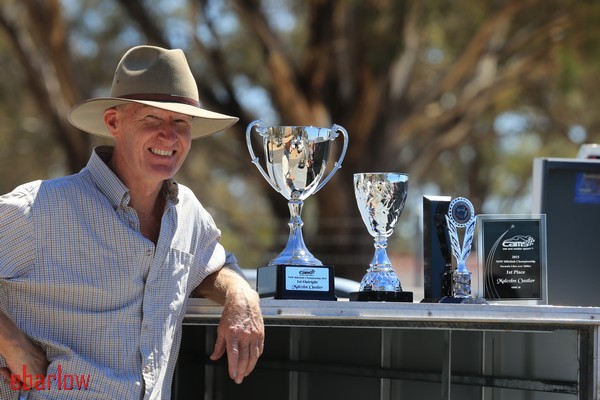 MALCOLM OASTLER – KING OF THE MOUNTAIN!

Sunday March 6, the second day of the annual Bathurst double header started with a sense of deja vu…another warm day to be broken only by the sound of the approaching Oastler OMS Express! Having bagged FTD on Saturday, could it happen again on Sunday?

From the opening run Malcom Oastler (OMS 28) set the tone with a time of 37.68s. The Man From Mudgee and local favourite Doug Barry (Lola T8750) responded as only Doug can. An opening time of 39.78s was set as he mightily impressed the crowd – charging over the finish line on three wheels after clipping the wall at the final flag. It appears that a change of offset on the rear wheels can make all the difference!

Course record holder Tim Edmondson (Gould GR55B) was less spectacular and slotted into third outright ahead of Dean Tighe (Dallara D375) and Darryl Watt (Force PC). On the subsequent runs Oastler shaved a few tenths to hold on to FTD at 37.58s a little outside Tim Edmondson’s course record of 36.83s. Edmondson replied with a run of 37.92s to move into second outright while Doug Barry watched from the edge of his chair the pit area.

As mentioned, in F/L 1301-2000cc Daryl Watt (Force PC) and Darren Read (Hayward 09) went at it all day ahead of a steadily improving Peter Robinson (VD/Suzuki) and Darval Thomas (JWS). Dave Morrow (Krygger Suzuki) was unopposed in the 750-1300cc class while Zac LeLievre (Westfield Megabusa) took the o-1600cc 2A class (11th O/R can’t be bad) from Andrew Walker (Turnham Bandit).

Jim Follan had a good outing in 2B/2F in the PRB while Paul Finch debuted the new Green Machine PRB with a personal best of 50.75s, taking the over 1600cc class win from Kevin Leggett (Lotus Exige) and John Engish (MX5).

Gwynn Mulholland turned back the clock for the weekend with the Ford Anglia on debut in the medium Sports Sedans, while Phil Heafey (Evo) snuck in ahead of Garry Ford (Escort) and Matt Halpin (Torana) in the big bore class.

Grant Liddell (Datsun1200) had a good return to regular competition in 3J, while Steve Brydie (Datsun1200) turned the tables on Col Mayman (Beetle) on this occasion ahead of co-driver Warwick Berge. John Gilbert (3J Commodore) made it two from two to finish ahead of Marty MacLoughlin (Torana).

Matt Cameron was in good form in the Skoda ahead of Paul Carroll (Elise) and Mitch Edwards (Toyota 86) in RRNL 0-2.5L. Daniel Hollier (WRX) unopposed in RRNLAWD.

Dejan Buneta had the immaculate black Supra cranking hard ahead of Tim Burt (Skyline) and Geoff Brisby (HSV Clubsport) in the well supported (something of an understatement) RRNL over 2.5L class. Duncan Handley (Leaf) kept his lead (?) in the all electric class ahead of wife Kelly.