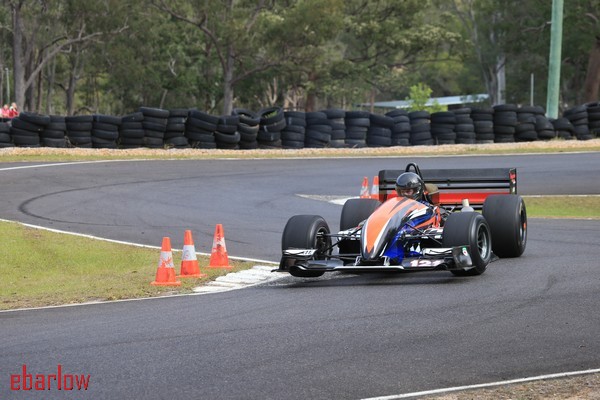 Maybe it’s that time of the year – you know that time of interstate rivalry – with people in maroon doing that little bit extra? Well Dean Tighe certainly did all that was necessary to keep the “Blues” at bay, at Mountainview on June 12.

After recent rain along the east coast, the Grafton Car Club team had done a great job of getting the course into a good condition but the chance of new records was considered unlikely.
Tighe had the Judd powered Dallara F395 cooking from the first run of 44.92s, on a circuit that does not favour the bigger cars. Next quickest was Kempsey’s Darren Read (Hayward 09) on 45.42s ahead of fellow North Coasters, Dave Morrow (Krygger Suzuki) and Daryl Watt (Force PC).

The second run on an improving track saw Tighe set his best of 44.67s, not a record but good enough for the win. Doug Barry (Lola T8750) eased into second outright (44.67s) with Watt and Read running neck and neck in the low 45s bracket.

As the conditions cooled the lead pair did not improve but Daryl Watt gave it one more shot (44.54s) to edge out “Farmer Doug” for second outright as Dave Morrow nailed down fourth outright ahead of Read. Great entertainment was provided by a quality field of Sports Sedans, with Garry Ford (Escort 47.76s) coming out on top of Phil Heafey in the Evo V1. Close behind was Ron Hay (Synergy Dallara, 48.35s) with Matt Halpin (Torana, 48.44s), squeezing ahead of Lee Gordon (Skyline GTR) and Daryl Small (Commodore).

In the Electric Class Duncan Handley noiselessly took the honours from wife Kelly in the Nissan Leaf while Stephen King ( Uberkart Reaper) was quickest in the up to 750cc F/Libre class after an entertaining “off” – fortunately without damage. In 2A Alan Barlow (AH Sprite) came in ahead of Brian Dunn (Arrow) and Neil DePau (Skyline).

Graeme Fleming (MX5) was quickest in 2B Marque Sports ahead of co-driver Jennifer Heuchmer and John Engish (MX5) followed by Team Semken in the MGF. Marea also took out the Quickest Lady award. Ron Gallagher was best in 2F ahead of Barrie Coady in Barrie’s MR2 while Grant Liddell claimed 3J Imp Prod (up to 1600cc) in his trusty Datsun 1200.

Jason Newling (WRX) cemented his place at the head of L/M Imp SV followed by Graeme Diskin (WRX) and Craig Albertson (XR6). David Dumolo had the immaculate TR3a going well in RR Non Logged up to 2.5l and Brett Manderson (Falcon) was positively beaming after taking the honours in RR Non Logged over 2.5l ahead of Sam Hollier and Liam O’Brien HSV GTS.

The Championship is looking super competitive with Daryl Watt now leading the outright pointscore by a single point ahead of Malcolm Oastler and Dean Tighe now level and Doug Barry only one point in arrears. The next round is at Tamworth, July 17.