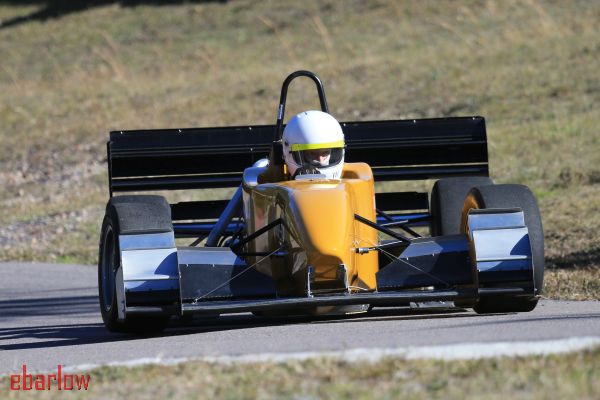 PRESSED BY THE BEST!

In fine but blustery conditions, past national and state champion Malcolm Oastler, led the way at MG Newcastle’s Ringwood hillclimb on July, 8. He was closely pressed by past state champions, Doug Barry and Dean Tighe who were going tooth and nail in a battle of their own.

The second run went to Tighe (35.95s) as Oastler had a rare moment and Barry, Morrow and Kempsey’s Darren Read (Hayward 09) consolidated.

Brightening conditions for the third and fourth runs saw Oastler step up the pace to 34.62s and finally FTD of 34.53s. Barry responded with a best of 35.68s while Tighe had a brave last gasp effort of 35.69s…only to fall short by just by.01s!

Darren Read claimed a creditable fourth outright ahead of the The Fox aka Dave Morrow, then Zac LeLievre (best of the good field of sportscars) and local clubman Francesco Mangano (Jedi Mk4).

So much for the openwheelers – Garry Ford in the booming Old Skool Group U Escort V8 was next (and best Tin Top) ahead of Neil DePau (Radical Prosports) and David Isaacs (Evo 9) in tenth outright. Newcastle locals, Darval Thomas (JWS) and Ray Bromley (Locost) rounded out the top dozen.

In Prodsports, Jeff Nichols took out the small bore 2B Class and Paul Finch (PRB) managed to get the better of the over 1600cc 2B cars this time, ahead of James Pearson (RX7) John Engish (MX5) and Bob Wootton (MGB).

Ron Gallagher (Toyota 86) finished ahead of Barrie Coady (Celica) in 2F while Richard Ostle (Mini) was quickest in 3D Sports Sedans under 1300cc ahead of Joshua Hayes (Fiat X19) as Rev.

Michael Cusiter set a new RR electric record while Karen Wilson blitzed the Imp Prod (Excl 4wd etc) class setting a new record (and Fastest Lady) ahead of Theo Poteris in the shared Commodore ahead of another fast lady, Louise Hayes who was sharing the drive with Geoff Brisby in another Commodore.

Having missed a few rounds due to other commitments, Malcolm was happy to collect the winner’s trophy with the comment “Those big cars are getting faster, looks like I’ll have to get my finger out in future.”

With just two rounds to go Barry leads the field on 75 points with favorite for second place being Dave Morrow, currently on 42 points.

Comments
Another great event by MGCCN, the event started on time, fine weather, five official runs and a timely finish, doesn’t get much better than that. AB