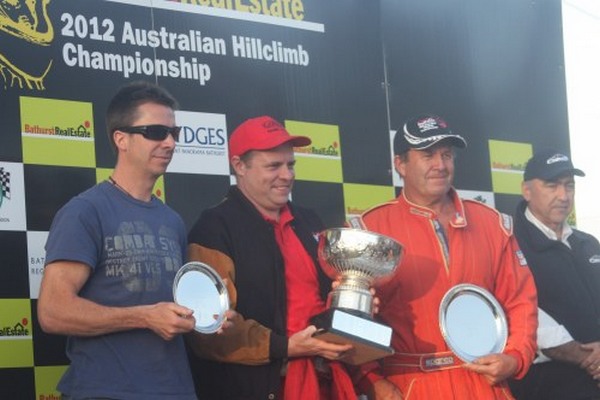 STUNNING RESULT AT THE AHC!

Against the odds, Sydney’s Tim Edmondson achieved a remarkable result on the 1.7k Bathurst Mountain Straight course in western NSW to win the 2012 Australian Championship. It must be one of the most remarkable successes in over seventy years of the Oz championship, and what a great weekend it was with lots of NSW regulars represented.

A number of electrical gremlins had conspired to limit Tim’s official runs but it all came together when the Gould GR55B (last car up the hill) closed the show with an amazing 36.83s, well under the outright record of 39.34s. There was high drama when the car failed on Saturday forcing the team to spend a lot of time overnight in communication with the boffins in Britain to sort out the issues But sort it out they did.

Commiserations to Doug Barry (Lola F3000) who was extremely focussed all weekend and under the old record with just one run to go. Unfortunately he had to settle for second place, a cruel result for the local driver, one of our most determined and well liked competitors.

Congratulations also to outgoing champion – Gippsland’s Brett Hayward – in putting his self made special into a well deserved third outright. Given the nature of the course it’s an awesome result for a bike powered machine. I’m sure he is already plotting to regain the trophy at Mount Cotton next year.