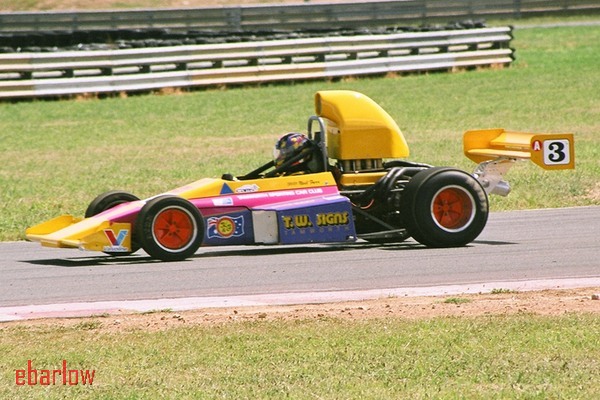 GUMLEY AWAY TO A GOOD START AT WAKEFIELD!

The MWSCC/Manly Sea Eagles Hill Climb, held at the tight Wakefield Park venue on February 19 again provided a great NSW season opener. A good field of around sixty competitors found new records hard to come by despite the warm conditions.

Peter Gumley (Wortmeyer SCV – Over 2000cc Formula Libre), set the early pace and FTD with a time of 43.96s, which was about half a second outside the outright record. Unfortunately supercharger problems arose, forcing retirement after only three of the five available runs. Neil Farr (Bowin Hay P6 V8) tried hard to pounce but was only able to manage a 45.40s for second outright.

Third outright (and F/L 1301-2000cc) was claimed by Tim Edmondson in the sleek Suzuki powered Force PC (46.73s), only to succumb to a suspension failure on his fourth run. Tim’s retirement also left the door open for veteran tuner Stan Pobjoy (VW Special) to grab a class win. Unfortunately, he finished a fraction short at 47.07s for second in class and fifth outright.

Steve Hooker, (Jedi Suzuki) continues his good form from last year, taking out the Formula Libre 751- 1300cc class and fourth outright with a 46.99s run. Meanwhile, one of the bestbattles of the day was provided by the under 750cc class. Geoff Lord’s diminutive Fubar clocked 48.43s, pipping Tom Donovan’s Megakart (48.59s), ahead of Phil Pratt in the Trojan(48.91s), for sixth, seventh and ninth outright.

Wayne Burden (Gemini S/S) was best Tin Top sneaking in between the open wheelers for a well deserved eighth outright (48.83s), just ahead of Garry Ford’s Escort (49.90s), who rounded out
the quickest ten.

Late Model Imp. Production class is proving quick for the competitor and popular with the spectator this year. A good field of Evos, WRX’s and 200SX’s swapped places all day, with Phil Heafey (EVO V1) proving to be the best, with a new class record of 52.09s to lead David Finnimore (EVO 6RS) at 52.23s and James Tsaoucis (WRX) on 53.87s.

A top start to what should be an interesting season