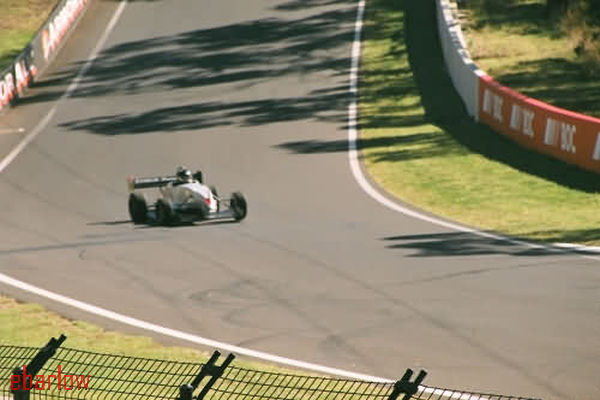 Day two of the Bathurst double header saw the field head to Mountain Straight, one the  longest and fastest ‘climbs in Oz.  There were lots of records broken and the outright result was in doubt right till the end. Tamworth’s Neil Farr (Bowin Hay) was into the lead after the first run of 42.25s, ahead of Peter Gumley (SCV) by .02s.  Next was Tim Edmondson’s high tech bike engined Force PC (43.58s).

Then things started to happen! Gumley responded by setting a new outright record of 41.16s despite seizing the blower as he approached the finish line and nursing a fading clutch.  The SCV was now a scratching but  Peter could be forgiven if he had assumed that FTD was well in hand.

Edmondson meanwhile chipped away at the deficit but was still nearly a second in arrears as he began his final run. In a copybook performance Tim stopped the clock at 41.15s – quickest by one hundredth of a second!   A fine result for the Edmondson team, who have had to overcome a lot of mechanical frustrations in the past 12 months.

A new Group R record and eighth outright for Ron Hay (RH Honda) while Phil Pratt (Trojan)finally turned the tables on Tom Donovan (Megakart) in the hotly contested up to 750cc F/Libre class for seventh outright. Matt Halpin (Torana S/Sedan) made a welcome return to the hills, and finished tenth outright, while the ever competitive Christine Campbell upset husband, Heath in the Beetle to take out the Imp Production 1601-2000cc class.