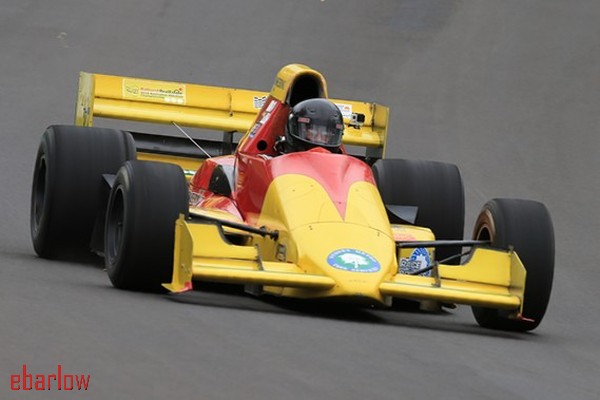 Sunday March 2, Round two of the NSW Championship (day two of the annual double header) got under way on BLCC’s fabulously fast Mountain Straight course in decidedly better conditions. This time the rain held off and speed improved as the track dried. In the early runs, past Australian and Victorian champion Brett Hayward was quickly into 40s bracket with his latest offering, the bike powered Hayward 014. Next quickest was Malcolm Oastler (Dallara), Doug Barry (Lola T8750) was next, still smarting after a low speed “off” the day before with Ron Hay (Synergy Dallara) solidly in fourth place.

Doug then got down to business following up a ragged 40.29s attempt by a super smooth 38.96s run. The V6 Buick bellowing loudly across Sulman Park’s undulations as he set FTD. Brett Hayward’s reply looked fast as he used the full extent of the bitumen but he had to settle for second slot on 40.44 with Malcolm Oastler third outright. Ron Hay was next best with Kevin Mackrell (Datsun 260Z) powering into fifth outright to claim best Sports Car and best Tin Top on the day and a new class record. Phil Heafey (EVO VI) claimed sixth outright ahead of a spirited drive by Steve Devjak (Commodore SS), another to claim a class record.

Cooper Calman (RX7) took out best Junior (49.79s) and Best Female went to Mechelle Sayoun (Subaru). With more class records awarded to David Isaacs (NLRRAWD Lancer Evo) and Gerard Skelly (NLRR 0-2500cc BMW E30). No new outright record but under the conditions a great effort. A suitable chuffed Doug Barry later commented “It got untidy through The Cutting on the earlier climb, but the last run was magic – the perfect run. I thought I really aced it”.

As at the end of Round 2 of the NSW Championship the pointscore is quite open. Phil Heafey leads on 20 points from Ron Hay (18 points) and Doug Barry (14 points). The next round at Canberra will be eagerly anticipated.