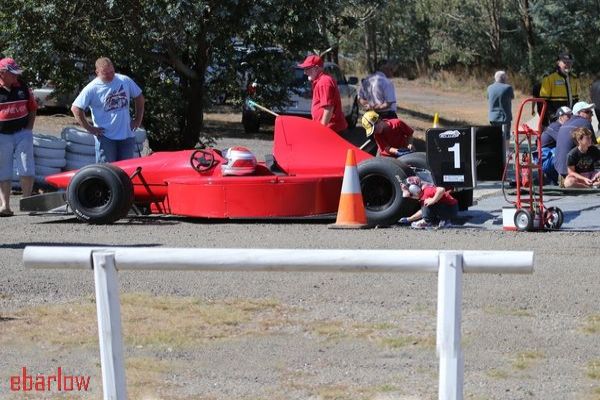 The SDMA club put on superb weather conditions for Round 4 of the NSW championship which was held on their popular Fairbairn Park course near Canberra. And that was just the beginning, what a day it turned out to be, as four drivers went under the course record of 38.98s, which was set back in 2006 by the legendary Peter Gumley.

Malcolm Oastler looked like setting the early pace (well it sort of is his home track) with the nimble Suzuki powered Dallara looking quick on the tighter parts of the course. Current national champion Tim Edmondson (Gould GR55B) had other ideas and was soon into stride to lead the time charts at the end of the first run.

A tight four-way tussle then ensued between Edmondson, Oastler, Victorian and past Oz champ Brett Hayward and current NSW champ Doug Barry as all went under 39s!. The next couple of runs saw Edmondson go even quicker, making full use of the traction control the big V8 stuttered its way to FTD of 37.67s.

Not to be outdone, Brett Hayward (having his first run at the hill in his self- built Hayward 09) also stunned the locals by reeling off a string of record bettering times to be second fastest at 37.82s. Malcolm Oastler had to settle for third quickest while current NSW champ Doug Barry was entitled to feel a bit miffed. Never one to shirk his responsibilities, Doug had reeled off three record breaking runs in the course of the day but surprisingly still had to settle for fourth outright. As we know Doug gives it 100% and even a trip down the escape “road” didn’t seem to put him off.

Ron Hay had a mixed day in the Synergy Dallara but it’s all coming together for him being next quickest at a whisker outside the magic 38 second mark. Next was Darren Read looking pleased with his new Minetti sports, ahead of the Top Tin Top Mitsubishi Evo of Phil Heafey at seventh outright. Bill McBride had the BBB clubbie in next slot ahead of Ashley Birks (Gemini) with Scott Tutton (Evo) rounding out the top ten.

As the Club President John Templeton handed out the trophies Tim Edmondson quipped “That was the toughest battle I think I’ve been involved in, it’s a field worthy of an Australian Championship. With 14 runs under the old record, it was a great event and an absolute thrill to win.” As the championship heads for Tamworth, the win gives Tim Edmondson a narrow lead in the NSW championship ahead of Barry, Hay and Oastler.