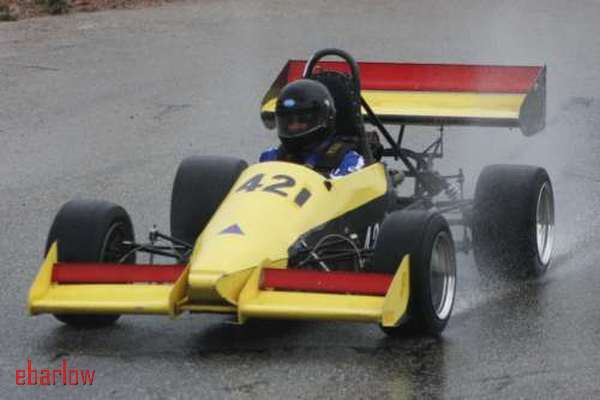 Canberra’s weather in April can be a little changeable.  It was perfect on Saturday but early Sunday morning rain was sweeping through making the Fairbairn Park track even more challenging.Doug Barry (Lola F3000) brought the damp with him from Mudgee (just to help out the local farmers) and immediately looked like a man on a mission, setting the early pace while those around him looked nervously skyward. All except for Phil Pratt -he casually pulled out the tyre groover and set to work!

The combination of surprisingly few “offs” and a slightly smaller field meant that a fifth run was now possible.  Doug Barry looked uneasy, commenting “it could always fine up and Peter is a master at pulling out a blinder on the last run” and about that time blue sky peeped through!

On a drying track Peter Gumley dropped his earlier best time by over six seconds to take FTD on 42.02s.  He was closely followed by Edmondson about three tenths adrift.  Steve Moxon slipped past his co-driver in the Axtell Suzuki to slip into third outright followed by a philosophical Doug Barry on 43..35s.  Michele Guyer was next best.While Peter has indicated that he won’t be attending all championship rounds this year, he coyly added “I‘ll have to turn up occasionally just to keep the fellas honest”.

Ron Hay (historic RH Honda) took a creditable sixth outright ahead of Steve Hooker (Jedi).  Eighth outright and Fastest Tin Top was Scott Tutton in the Evo2 from Searle Courtright in the Axtell Mark Guyer rounded out the top ten in the Nissan GTR from Daniel Burton in the Honda Civic.