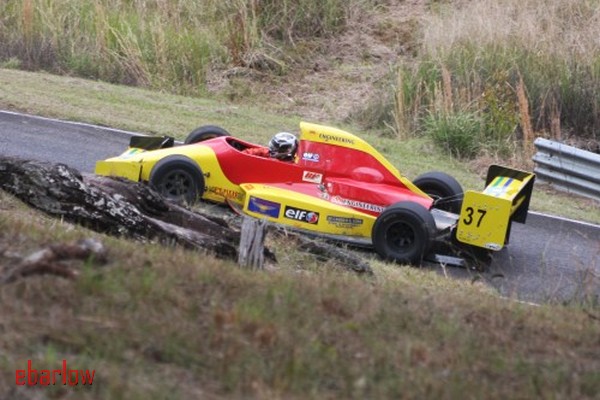 Championship leader Doug Barry tightened his grip on the NSW title with an untroubled win at Grafton on June 10.  Doug is showing a steely determination this year, avoiding any non-essential events and even limiting practice runs in order to ensure the reliability of his trusty Lola F3000.

Conditions were a little slippery with a forecast of late rain but  to the delight of the many spectators the keener drivers were forced to press on and not waste any opportunity.  Barry got into it early in the day then continued to set the pace posting FTD on his fourth run (44.37s), closely shadowed by Coffs Harbour’s Dave Morrow (Krygger Suzuki), local driver Tyrone Bauer, demonstrating the virtues of AWD (WRX), followed by Ron Hay who is settling in well to the new Synergy Dallara.

Gary Ford (Ford Escort) was fifth outright followed by Daryl Watt having his first drive in the ex Tim Edmondson Force PC.  Daryl went “bush” on his third run but suffered only minor damage.  Going by past performances in the Westfield, Daryl is tipped to be a contender when he becomes more familiar with his new mount. Nick Contojohn (WRX), Bill Norton (GRD), Alan Hindes (Piranha) and Nathan Parziani (EVO9) rounded out the top ten.

Doug is keeping his eye on the ball this year, commenting later that despite the vast differences in courses “the car was so good at Bathurst I didn’t change a thing…I wasn’t going to mess with something that was working that well”.