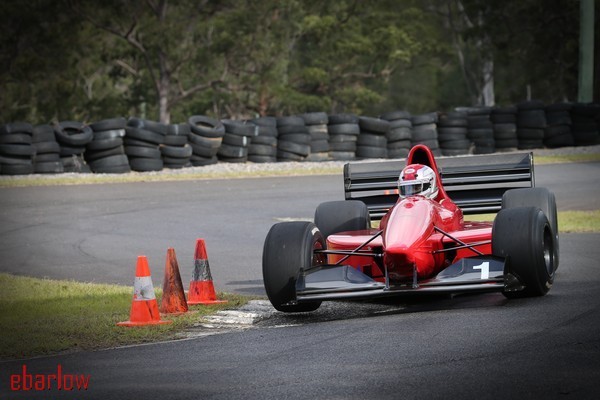 Round 6 of the NSW Hillclimb Championship and it’s off to the home of Grafton Sporting Car Club – the challenging Moutainview course, just a few kilometres north of the Jacaranda City. Lots of pre-event discussion centred on whether the long-standing course record of 43.02s set by Peter Gumley back in 2005 would be under threat from Tim Edmondson in the Gould GR55B.

Dark horses to be considered included “local” Daryl Watt who is looking pretty comfortable these days in the ex-Edmondson Force PC and Coffs Coaster Dave Morrow in the Krygger Suzuki.
Tim quickly got down to business leading the field on low 43’s ahead of Dave Morrow, Daryl Watt, Ron Hay (Synergy Dallara) and Doug Barry (LolaT8750). The smaller capacity bike engine cars are always a threat on this tight course.

The sun appeared and then Edmondson put the question well beyond doubt with two runs under the old record, the best of which (42.58s) was completed with a lurid spin across the finish line as Tim braked from 140 kays and aimed for the return road.

Daryl Watt was second outright, (equalling the 1301-2000cc class record held by Tim Edmondson in the same car) while “Farmer Doug” Barry from Mudgee kept his championship hopes alive as he squeezed into third outright.

Ron Hay is starting to get some rewards for his efforts in developing the V8 Synergy Dallara and was just two hundredths of a second in arrears of Doug. Dave Morrow was positively beaming after a sub 45s run cut a sizeable chunk off 750cc class record also previously held by Tim Edmondson in the Jedi from back in 2002.

In accepting his trophy Tim added ‘It’s a great honour to be able to claim a record set by Peter Gumley, who is undoubtedly the most successful Australian hillclimber in history. It was a great day’s racing with so many records broken and it’s nice to have built a small lead in the title chase’.

With three rounds to go Edmondson now holds a strong lead in the NSW Championship from Doug Barry, Ron Hay and Malcolm Oastler.