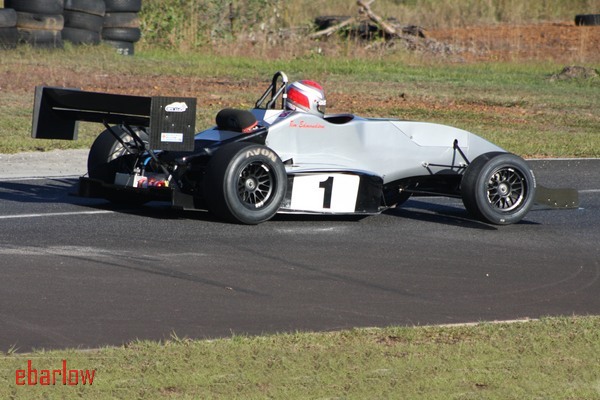 On June 7, Grafton Sporting Car Club hosted round five of the NSW Championship at the popular Mountainview course, which the club has proudly operated since 1965.

Overnight rain made the early runs a little slippery but this only added to the interest as four or five drivers battled for the outright lead.

Steve Moxon proved “less is more” by setting the early place in the 750cc Axtel Suzuki ahead of Tyrone Bauer in a WRX of all things! These two were the only cars under 50s at that stage.

Championship leader Tim Edmondson (Force PC) rebounded on the second run to take the lead on 46.99s from Moxon, with “The Man From the Land”, Doug Barry (Lola F3000) settling into third outright.

A slight slip by Tim on the next run opened the door for both Barry and Moxon to sneak ahead while Tom Donovan (Pilbeam) moved to fourth, with Searle Courtright (Axtell Suzuki) close behind.

Tim added later “We were a bit luck today, as the competition was again very close. We are definitely looking forward to the next round at Ringwood”.

The sedans provided great entertainment all day. Tyrone Bauer claimed Top Tin Top and quickest Sports Sedan ahead of Garry Ford (Escort) and Matt Halpin in the Torana. Mark Guyer (Nissan GTR) and Scott Tutton(Lancer) took up where they left off at Kempsey and were never far apart all day in Late Model Improved.

Improved Production 1600cc-2000cc cars were well represented with no less than nine entries! The battle for honours was resolved for the fairer sex when Christine Campbell (VW Beetle) downed hubby Heath by a few tenths. Bill Heuchmer’s rapid Corolla and Steve Sauer’s Escort dead heated for third in the class. Andrew Frost was first Junior.