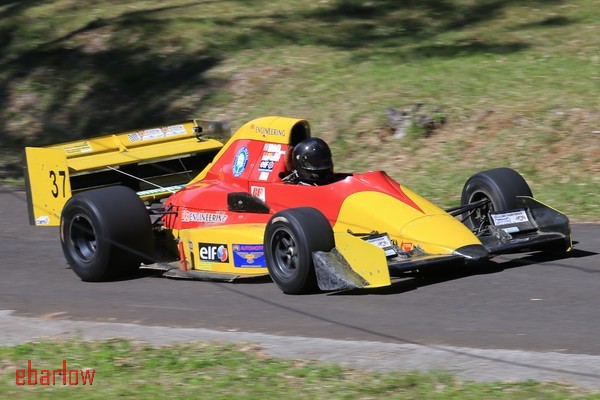 EVERY DOUG HAS HIS DAY!

WSCC turned on great conditions for Round 8 of the NSW Championship, on arguably the steepest climb available, the 658m of Colliery road at Huntley on September 14.

Championship leader Brett Hayward was a late scratching, choosing to go to Collingrove and the South Australian Championship, which could lead to an interesting finish to the year, but more of that later…

One notable starter was multiple past NSW champion and hill record holder Tim Edmondson, back in the saddle after an injury layoff and aiming to keep messrs Barry, Oastler and Hay honest.

Barry then reeled off a series of fastest times to close out the competion with FTD on his fifth and final run at 19.93s. Edmondson and Oastler slugged it out for second outright – the decision finally going to Edmondson by 0.16s! Ron Hay had to settle for fourth outright on 21.45s after loosing a front winglet – no he wasn’t hanging around either from the video footage I’ve seen.

Sam Hollier took out LM Imp Prod in the Falcon, Tamworth’s Craig Albertson another class winner in the XR6 while Bob Wooton managed to have a S(c) class win before the diff in the Lotus gave up the ghost.

The Bell family were well involved with Joanne taking a class win (and Fastest Lady) in the Mini as Bob handled the start line and Warren drove the much needed spectator bus! Matt Halpin proved he can handle east west power with a guest drive in the Honda powered Bell Mini.

The win consolidates second place for Doug Barry (75 points) with Brett Hayward still in the lead on 81 points going in to the final round at Newcastle’s King Edward Park on October 5.

As Doug said afterwards “While it would have been great to beat Brett here at Huntley today, the Championship is still wide open and it will be ‘Winner Takes All’ at KEP – which is great for the Championship”.