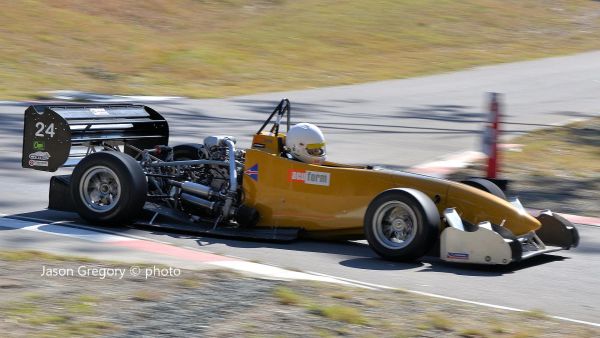 A RECORD IN EVERY CLASS!

The second last round of the Mantic Clutch NSW Hillclimb Championships ran at the MG Car Club Newcastle’s Ringwood complex. They have seven licensed layouts, and the longest one of 1.33km was on offer, along with the chance for the capacity field to set state records on it for the first time.

Saturday’s practise saw a lot of incidents on the top straight. Greg Legget lost a front spoiler after an off loosened it, and the Common Door then ran right over it.

About 20 cars ran off straight ahead at its hairpin end on the second time they passed through it, their initial caution obviously having lifted, and then returning as a consequence!

Wayne Gosser was one of them, but had a huge shunt into the tire wall when (pit rumor says), his fly by wire throttle stuck open. Not the first big crash for the only Falcon in the series, so we hope it comes back yet again for more hard entertaining pedalling – but that was game over.

Bill Pearson was trying out his new Muscle Hatch Honda Civic for the first time, but one run with no oil circulation brought the result you’d expect to it’s V6. He says plumbing the remote oil filter backwards is not advised as this turns it into a block off valve. Duuoohh!

On race day Bob Bell began with an engine problem, but overcame it for the rest of the day. This particular track layout had a cross over in it, and two guys went the wrong way on their first attack.

Gwyn Mulholland was one of them in his Mk1 Cortina, who can now add a WD in a hill climb to one of his many racing accomplishments.

Greg Jones in the Clubman GSL spun on turn two on his fourth run. Wayne Penrose mimicked him in the VW Beetle, trying to catch the V8 Celica for the class lead. Any day you beat a determined WPVW is a good one.

Young Warren Bell was the very last car of the day in the supercharged V8 Stanza, sliding off into the basin after the finish. No gain there Wayne & lucky it hasn’t rained for months or you’d have been literally down the drain!

Thank you to the hosts who ran a faultless day with perfect weather & a cranking canteen. Huge gratitude goes to every official – no racing without you. Y’know some of them drive hundreds of kilometres & spend several days away from home weekend after weekend just to officiate. Props! (They’ll have to look that up in an urban dictionary).

times.Attention in this series now turns to Wollongong where an absolute mountain of working bees has resulted in gigantic improvements to one of our oldest, still operating hill climbs. The club members want to welcome you, but also beat you up. Record times await.

5. Ben Brown up to his usual dance pose in the Renault Clio 172

6. Kendall O’Connor had his Mazda MX5 right on the edge

3. Christopher Bolton locking everything up in his Sports Sedan Commodore